A Little Less Sugar Helps The Medicine Go Down

In March 2016 the UK Government announced the introduction of a “Sugar Tax”, which came into effect from 6th April 2018.

Formally known as the Soft Drinks Industry Levy (SDIL), the sugar tax is a levy put on drinks companies to reduce high sugar levels in soft drinks. Companies are now taxed according to the sugar content of their wares.

One level is for drinks with a total sugar content of more than 5g per 100ml, while a second, higher levy is imposed on drinks with 8g per 100ml or more. 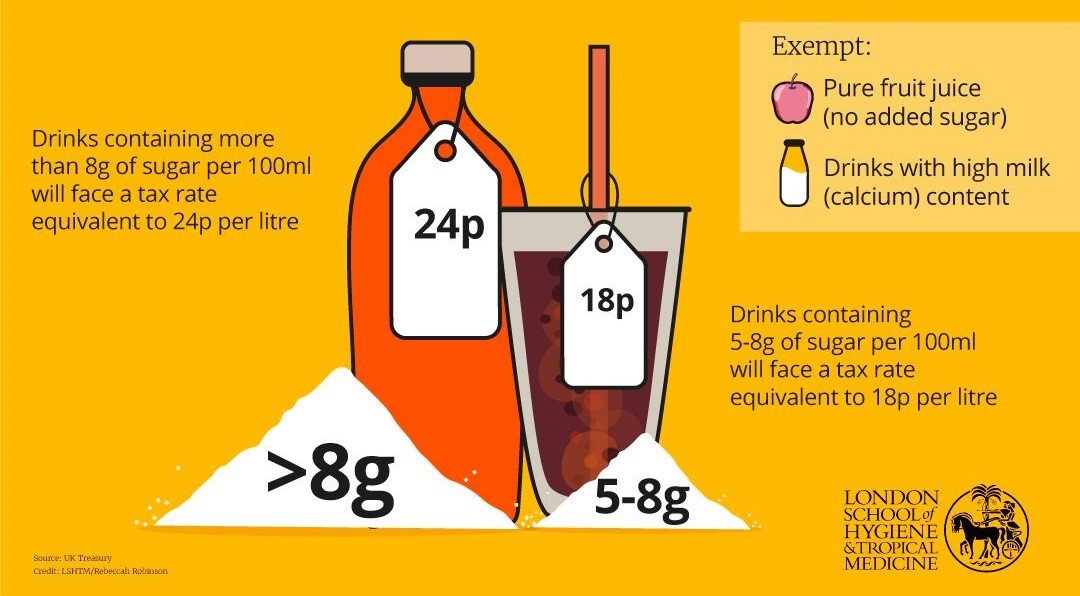 The aim of the SDIL is to encourage companies to reformulate their soft drinks.

During the recent Conservative Party leadership contest, Boris Johnson argued that “we should look at how effective the so-called ‘sin taxes’ really are, and if they actually change behaviour”. https://www.theguardian.com/politics/2019/jul/03/boris-johnson-vows-to-review-whether-sugar-tax-improves-health

Has it worked? A recent report from the Institute for Fiscal Studies (IFS) suggests that it has.

The justification for taxing soft drinks is that there are costs associated with their consumption that people do not fully consider, such as linking the consumption of sugary drinks to increased rates of obesity, diabetes, tooth decay and other health conditions, and so higher healthcare costs borne by the NHS.

Levying a tax on sugary soft drinks acts to increase the price and can encourage people to switch to alternatives. The extent to which soft drink taxes are effective at reducing sugar intake therefore depends, in part, on how prices adjust to the tax and how people change their purchases in response to price changes.

20 of the 27 studies that the IFS surveyed looked at the effects of soft drink taxes on prices – all studies found that taxes increased prices faced by consumers. 16 of the studies looked at the effects on purchases, with most finding that taxes lead to reductions in purchases of soft drinks but that there is considerable variation in the size of these reductions, reflecting the differences in the tax rates in each jurisdiction.

A common criticism of taxes on soft drinks is that they may disproportionately affect lower income individuals, because they spend a greater fraction of their income on soft drinks. However, poor diet and its negative health consequences are also more prevalent among lower income households; there could be substantial health benefits if taxes lead these households to reduce their intake of sugar.

Thus, other effects of tax are important: re-formulation and education on the health costs of sugar, but none of the studies looked at the effect of soft drink taxes on reformulation or on the information effect. Nor do they look at the degree to which consumers switch to other unhealthy products.

The UK tax is structured in a way designed to encourage reformulation, with a higher tax rate on products with more than 8g sugar per 100ml, and a lower rate on those with 5-8 grams of sugar per 100ml. recent research by Public Health England highlights that the sugar content of soft drinks in the UK has declined since the introduction of the tax in April 2018. https://www.gov.uk/government/news/new-report-shows-further-sugar-reduction-progress-by-food-industry-1

These are early days, but the signs suggest that the sugar tax policy is working without having an impact on either affordability for poorer households or on the profits of the manufacturers.

Will the policy be rolled out across other food and drink products? We’ll see, but it looks like a positive way to protect consumers and the UK budget at the same time.

A little less sugar seems to have the potential to help the medicine bills go down.