Energy – From Hydrocarbons to A New Economic Paradigm?

Some people would argue that significant shifts in the availability and cost of energy cause great economic and social leaps forward. Without trying to defend that proposition, in this and subsequent editions we shall explore the changes in the provision and use of electricity and the impact it may have upon social and economic value chains.

Many of the ideas we explore will be reflected in the investment choices we make. Already funds we invest in have exposure to renewable energy generation and storage, electric vehicles and their components, data analysis, robotics and artificial intelligence. Stalwarts of the past, such as electricity utility or oil and gas companies, will increasingly have their relevance questioned.

Progress will be gradual in nature and take many years to reach fruition, but it is already happening.

Throughout the twentieth century energy generation was dependent upon hydrocarbons, whether for heating our homes or powering our cars. The cost has often been held captive to the competing political and economic interests of the providers. This may now be changing. The pricing of renewable energy generation is continuing to fall to such a degree that the installed base of wind and solar installations is increasingly meaningfully. It is hard to believe that this would not continue.

The majority of power generated is lost in the processes of generation, transmission and distribution. This drives interest in having a decentralised network of generation, such as solar panels and tiles on factories or houses, or combined heat and power facilities, such as that at St Bartholomew’s Hospital in London.

When a meaningful breakthrough has been made in the storage of electricity, both the advantages of hydrocarbons, availability at a reasonable price and transportability, will have been superseded. Already the need for large centralised generators has been removed.

Bloomberg New Energy Finance predicts that global electricity demand is set to increase 62%, resulting in global generating capacity almost tripling between 2018 and 2050. This will attract $13.3 trillion in new investment, of which wind will take $5.3 trillion and solar $4.2 trillion. In addition to the spending on new generating plants, $840 billion will go to batteries and $11.4 trillion to grid expansion. (Source: Bloomberg NEF New Energy Outlook 2019) 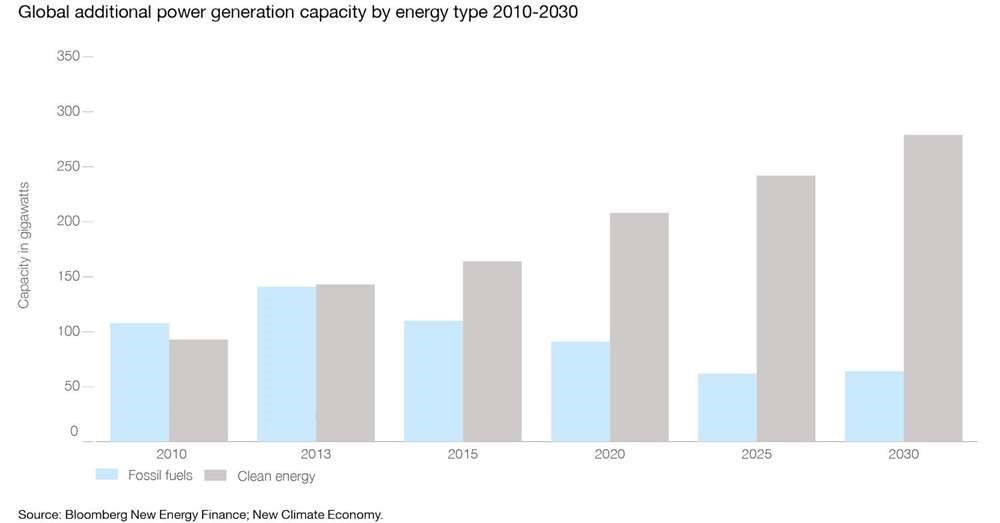 Throughout the world, but especially in lesser developed economies, demand for clean and locally generated electricity is growing dramatically. Whether you are a climate change believer or denier there will be opportunities to invest profitably.

Back to News & Insight