Just as trade wars and Brexit are splitting alliances apart, at least one area of the world is coming together. Africa! On Sunday 54 of 55 African nations signed a continent-wide free trade agreement – the African Continental Free Trade Area.  The agreement aims to enable free movement across the continent, tariff-free trade and perhaps even a common currency.

90% of tariffs would be scrapped within five years, although some of the poorest African nations will get an extra five to 10 years on tariff reduction to protect them from cheaper imports.

The African Continental Free Trade Area would include 1.3 billion people in a $3.4 trillion economic bloc. It would be the biggest free trade area in the world.

Tim Marshall’s fascinating book, “Prisoners of Geography” shows how countries normally trade with their neighbours, but this hasn’t happened in Africa. Twice as much trade occurs with Europe than with other African countries.

This has in part been held back by the lack of a regional railway infrastructure: 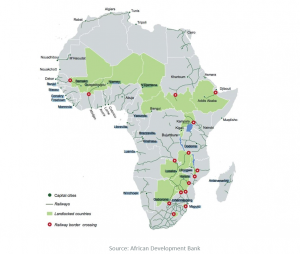 Another part of the agreement would be to have a digital passport to allow people to have freedom of movement like in the EU.

Poverty has also been a problem. With a lack of funding for the basics, many countries simply just lack good roads.

There will be many hurdles to overcome, such as corruption, severe inequality and different cultures and ethnicities, but could this be the catalyst which turns people’s dreams of prosperity and quality of life into reality?