The first quarter of 2022 provided a turbulent set of challenges for the GBIM Capital Preservation strategy. Foremost was of course the invasion of Ukraine by Russia which, despite the US CIA providing a series of escalating warnings, came as a surprise to most market participants.

A sharp escalation in the rate of inflation globally also surprised markets by both its scale and by an increasing sense of permanence. The central banks’ description of inflation as ‘transitory’ disappeared as it became clear that high CPIs are likely to be around for most of 2022. Finally, Covid continued its threatening presence throughout the world, proving its effects are by no means over yet. The locking down of China’s two major industrial heartlands, Shanghai and Shenzhen, as it struggled to maintain its policy of zero Covid, added further tension to supply chain problems which had already been in evidence since the economic recovery from Covid began last year.

Against this challenging background, the CP strategy was able to achieve a small positive return as the majority (11 out of 19) of its investments turned in positive total returns over the quarter. This only tells part of the story however, as the biggest contributors among the former group produced significantly higher positive returns than did the worst losers. Among the gainers, gold stands out, not least because it provides a haven of safety in times of war as well as a time-honoured hedge against inflation. The portfolio has a direct holding in gold as well as meaningful allocations to the commodity in two of its multi-asset funds, Trojan and Ruffer. The environment was also one in which our global macro hedge fund exposure (in the form of BH Macro) was able to thrive.

Among the losers, our bond holdings performed poorly given the rapid switch from monetary accommodation to monetary tapering on the part of global central banks responding (belatedly, with the benefit of hindsight) to the inflation surge by raising interest rates sharply and reducing QE. Most of our fixed income holdings have low duration so losses were limited, but the bond funds with longer duration (the Fidelity and Allianz strategic bond funds) which lost more are held as a protection against the threat of a recession brought on by the problems (and the responses to them) described above.

Looking to the future, we expect to maintain a similar portfolio of well-diversified assets with low or negative correlations to each other. While we do not expect the current mainly exogenous inflation to shift into a wage-price spiral (as it did in the 1970s and early 80s), better preservation of the real (rather than just the nominal) purchasing power of the portfolio will remain high on our agenda for the rest of 2022.

To find out more about our Capital Preservation Portfolio Service, please click here. 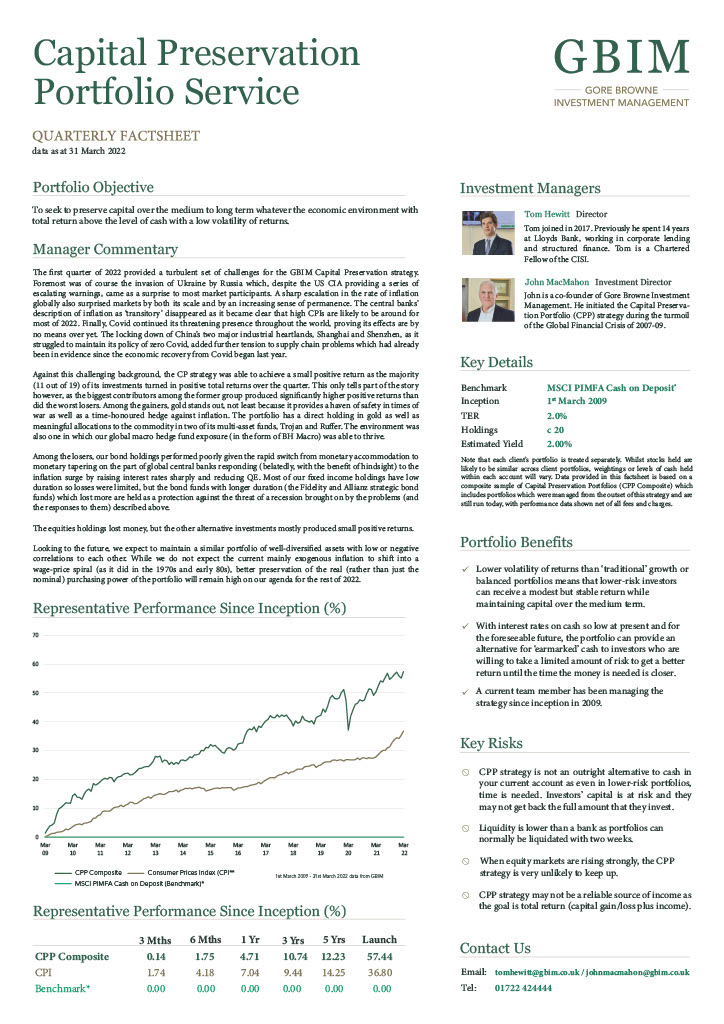 Risk warning: You should remember that the value of investments, whether pooled or direct equities, and the income derived therefrom may fall as well as rise and you may not get back the amount that you invest. In the event that you require a level of income higher than that generated by your portfolio, you should be aware this will dilute the capital value of your portfolio. Past performance is not a guide to the future. If you are in any doubt of the suitability of an investment for your particular circumstances, you should contact an investment manager for tailored advice.

Article written by
John MacMahon
Back to News & Insight