Fire and The Forest

Fires, and especially those in the Brazilian rainforest, have been in the news recently. Is this the fault of President Bolsonaro? How important is this for climate change? What are the economics of this?

In a recent episode of 50 Things That Made The Modern Economy, Tim Harford considered the suggestion that humanity’s taming of fire may be where the story of economics really begins. (Source: https://www.bbc.co.uk/sounds/play/w3csz2wp)

He pointed out that lightning is the main natural culprit for inflagrations, and that satellite data shows up to 8 million strikes per day.

Nevertheless, the National Geographic states that although they are classified by the Environmental Protection Agency as natural disasters, only 10 – 15% of wildfires occur on their own in nature. The other 85 – 90% result from human causes, including unattended camp fires, discarded cigarettes, and arson. (Source: https://www.nationalgeographic.com/environment/natural-disasters/wildfires/)

The photograph below from NASA shows just how many fires were detected across South America earlier this month. Evidently not just in the Brazilian rainforest. 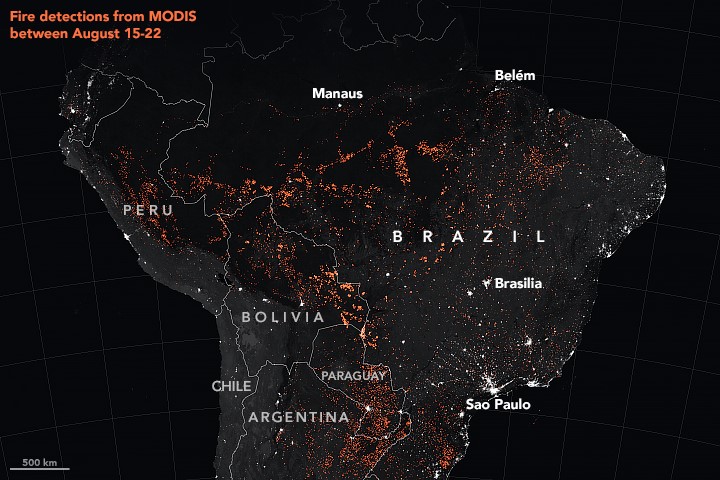 Fires can help preserve the integrity of forests, but they are also associated with de-forestation, which has been the source of much concern in Brazil this year.

Although they are feared, naturally occurring wildfires play an integral role in nature. By burning dead or decaying matter, they can return otherwise trapped nutrients to the soil. They also act as a disinfectant, removing disease-ridden plants and harmful insects from an ecosystem. https://www.nationalgeographic.com/environment/natural-disasters/wildfires/

De-forestation however can exacerbate the intensity and extent of wildfires. Although clearing the forest can initially appear to be of economic and social benefit by increasing land available for agriculture and housing, the longer-term effects may be negative, not just for biodiversity and the climate, but also economically. The probability of human interference grows too.

Calculating the economic effects of climate change is no simple matter. It means working out how a given increase in global temperature affects local weather conditions; how local weather affects things like mortality and crop yields; how those changes add to or subtract from regional GDP; and how thousands of local-level changes in GDP add up nationally or globally.

However researchers project that moist, forested areas are likely to face greater threats from wildfires as conditions in those areas become drier and hotter. These climate change effects are exacerbated by de-forestation.

The economic costs of wildfires can be substantial.

Data on total US property damage from wildfires are hard to come by, but the costs are estimated to be on the level of hundreds of millions of dollars per year. In addition to property damage, wildfires cost states and the federal government millions in fire-suppression management. The US Forest Service’s yearly fire-suppression costs have exceeded $1 billion for 13 of the 18 years between 2000 and 2017. In 2015, these costs exceeded $2 billion, and in 2017 they totalled almost $3 billion.  (Source: https://www.ucsusa.org/global-warming/science-and-impacts/impacts/global-warming-and-wildfire.html)

And so to Brazil. The Amazon rainforest is the largest and most biodiverse rainforest in the world, containing 90% of the world’s known species and is seen as vital in the global fight against climate change. Brazil is home to 60% of the Amazon.

Deforestation in the Brazilian Amazon rainforest has risen by 88% in the last year. (Source: https://www.theguardian.com/world/2019/jul/03/brazil-amazon-rainforest-deforestation-environment)

For decades it has been difficult for the government to stop illegal logging, which makes up 70-80% of all logging activity, but in recent years the Brazilian authorities were able to contain the activity to some degree. Sadly, since his election in January, Mr Bolsonaro has made efforts to strip parts of the Amazon of their protected status, which could send a positive message to illegal loggers.

He says “the Amazon is ours”, and so what happens to it is Brazil’s business. He denies the satellite evidence provided by Brazil’s National Institute for Space Research calling the images a ‘lie’. (Source: https://www.sciencemag.org/news/2019/07/deforestation-amazon-shooting-brazil-s-president-calls-data-lie)

However, there is pressure on Brazil to protect the Amazon from deforestation under the terms of the free trade deal between the EU and South American bloc Mercosur. An outline agreement includes a provision that the Paris Agreement on climate change must be effectively implemented along with other commitments to fight deforestation. French President Emmanuel Macron warned that he would not sign the EU-Mercosur trade deal if Brazil leaves the Paris Agreement.

The economics are complicated! But it seems climate change exacerbates them. It should therefore make financial sense to invest to protect the forests from further damage. I shall write more on this.