Last week the Resolution Foundation (RF) presented their findings about the current state of Living Standards in the UK https://www.resolutionfoundation.org/events/the-past-present-and-future-of-living-standards-what-drives-income-growth-and-inequality-across-britain/.

I knew that they would discuss in-work poverty and generational inequality, and recognised that the presence of John McDonnell on the panel would engage the audience with ideas of how economic policy might be changed. But what I did not expect was the impact that would be made, on me at least, by Sam Smethers, Chief Executive of the Fawcett Society, a charity leading the fight against gender inequality. https://www.fawcettsociety.org.uk/faceherfuture

While acknowledging the RF’s excellent analysis of how women have contributed substantially in the last decade to improvements in employment and living standards, Sam emphasised that we should look below the headlines. She pointed out that much is still required to enable women to fulfil their potential in a job or even to have a good job given the vagaries of current benefits arrangements. 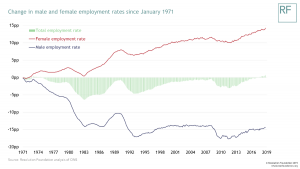 Women are working below their potential, and are often trapped in low paid, part-time work when they would prefer to do more. Experience shows however that it is rare for them to be able to “trade up” from such positions.

The Fawcett Society recently conducted research concluding that a third of all employees do not know that it is illegal for women and men to get paid differently for doing the same work. https://www.independent.co.uk/preview-of-the-year-2019/gender-pay-gap-women-workplace-equality-shared-parental-leave-ftse-100-a8655676.html

Nearly 50 years after the Equal Pay Act 1970 a gap remains. It has been reduced, especially for younger women, but it persists. The gender pay gap stands at 8.6% among full-time employees, but the gap among all employees is higher (17.9%), driven by more women working in part-time jobs, which are lower paid (an average hourly rate is £9.36 compared with £14.31, excluding overtime, for full-time jobs). Source: ONS 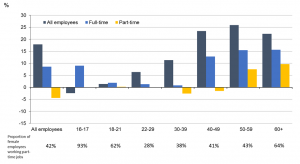 In two studies, one in 2014 the other in 2017, McKinsey discovered that companies in the top quartile for gender diversity on their executive teams were more likely to have above-average profitability than companies in the fourth quartile. In the 2017 data set this number rose to 21% from 15% and continued to be statistically significant.

This suggests that we should be aware of gender diversity when we consider our equity investments. It is not easy to analyse companies in this way but there are two aids I have come across: the Bloomberg Gender Equality Index (GEI) and Equileap.

GEI tracks the performance of the public companies most committed to advancing women globally. https://data.bloomberglp.com/company/sites/46/2019/01/20094_2019_GEI_brochure_revamp_V15-2.pdf.  The 2019 index includes 230 companies headquartered in 36 countries and regions and includes some well-known British names.

Equileap’s mission is to accelerate gender equality in the workplace and it assesses how good intentions in the corporate sector translate into action. It measures which companies are making a real difference in gender balance, gaining from the ‘gender dividend’ – the positive impact which shows that gender diverse companies tend to produce above trend returns, have lower risks and better safety records. https://equileap.org/wp-content/uploads/2018/10/Equileap-Gender-Equality-Global-Report-and-Ranking-2018.pdf.

I have identified five funds which are available to UK investors. They are all relatively recent introductions, and so long term track records are not available, but it is a starting point for those who wish to support companies which embrace gender diversity.