Thanks to NASA for this map of dust clouds crossing the Atlantic from Africa to the Caribbean and Latin America.

Previously I have posted photographs from NASA which showed how lockdowns in China and Italy had improved the air quality in those places. This picture shows how winds enable even inert items to “migrate”. 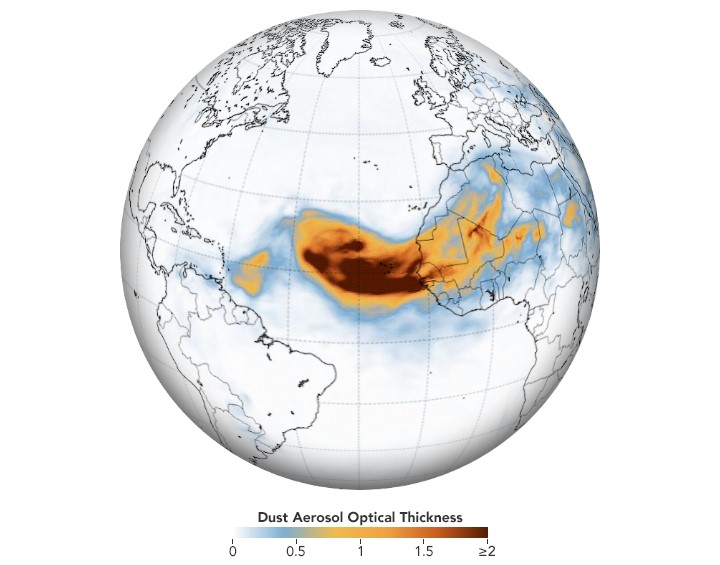 “The map above shows the dust on June 18 as represented by the Goddard Earth Observing System Model, Version 5. GEOS-5 is a global atmospheric model that uses mathematical equations to represent physical processes. The map depicts aerosol optical thickness, a measure of the amount of light that the aerosols scatter and absorb, and a proxy for the number of particles in the air. Orange and red colours indicate extremely hazy conditions.

The thickest parts of the plume appear to stretch about 1,500 miles across the Atlantic. Forecasts indicate that the dust could reach the Caribbean by June 20, and then later drift over the contiguous United States.

Dust from Africa can affect air quality as far away as North and South America if it is mixed into the air near the ground. But the dust plays an important ecological role, such as fertilizing soils in the Amazon and building beaches in the Caribbean. The dry, warm, and windy conditions associated with Saharan Air Layer outbreaks can also suppress the formation and intensification of tropical cyclones.” Source: https://earthobservatory.nasa.gov/images/146871/dust-traverses-the-atlantic-ocean?src=nha