Many of us feel conflicted about power generation. On the one hand we recognise the strength of scientific argument about climate change, while on the other most of us are terrible Nimbies when a proposal for a wind or solar farm in a neighbouring field emerges.

But a “landmark” event occurred this summer. Combined British renewable power generating capacity now exceeds that powered by coal, oil and gas. Wind farms form the largest share of Britain’s renewables. Renewable UK (Press Release 7th March 2019) report that it took 19 years to build Britain’s first 5 gigawatts (GW) of wind capacity, but only two years to build the most recent 5 GW. There are 13 GW of onshore wind farms, about two-thirds of which are in Scotland. The 7.2 GW of offshore capacity makes Britain the world’s leader, with 45% of global capacity.

Solar power has the second largest capacity of renewables. 13 GW of solar panels are distributed across 960,000 rooftop systems and numerous larger farms, primarily across the south of England. Capacity growth has slowed in the last two years, but as the cost of panels continues to fall smaller private investment opportunities becomes more likely.

Thankfully for the nimbies amongst us, the Government’s Innovate UK department predicts that energy will come to be seen more as a service than a commodity, and that it will be increasingly decentralised. (Blog 6th Mar 2018). 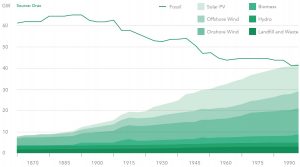 One of the major benefits of decentralised energy is the move away from large power stations to localised production. That means avoiding the wasted heat in power stations and instead using it locally, and avoiding having to produce the electricity lost in transmission because we have to send it so far. At present, we waste about half of our energy in the UK. (Source: Innovate UK)

With the rise of decentralised energy, local producer-consumers will need to manage the energy in the system more flexibly. The energy market will become largely digital, so that it can integrate all the many parts of the energy world and enable them to work together.

The complexity of matching energy demand with energy supply locally and nationally, and integrating storage and demand flexibility, is of such a scale that automation, machine learning and real-time price signals will be needed.

Through the Internet of Things and connected homes concepts, electronic devices such as washing machines, dishwashers and freezers will be connected so that energy can either be used at the best price, or disconnected when there is too much demand.

Through investments in infrastructure and technology funds we seek to capture these developments.