The Slowly Declining Power of The Dollar

Make no mistake, the Dollar is the dominant global currency and will remain so for some time. Nevertheless, its relative power is in a slow, long-term decline.

This week, the IMF has issued its latest analysis of the Dollar’s importance as a reserve currency.[i] The “green back” retains its pre-eminent position, constituting 59% of global foreign exchange reserves, but this is the lowest level since the Euro was introduced in 1999, when it was 71% of reserves.

The Euro has held steady at about 20% and is the next largest reserve position. The share of other currencies including the Australian dollar, Canadian dollar, and Chinese renminbi, but excluding the Pound and the Yen, climbed to 9 percent in the fourth quarter (green line in the top chart).

In the long run, we expect the renminbi to gain ground as China’s economy grows and its financial markets become more open, as the renminbi-based commodity markets take share of global commodity trading, and as China’s Asian markets do more intra-regional trade. 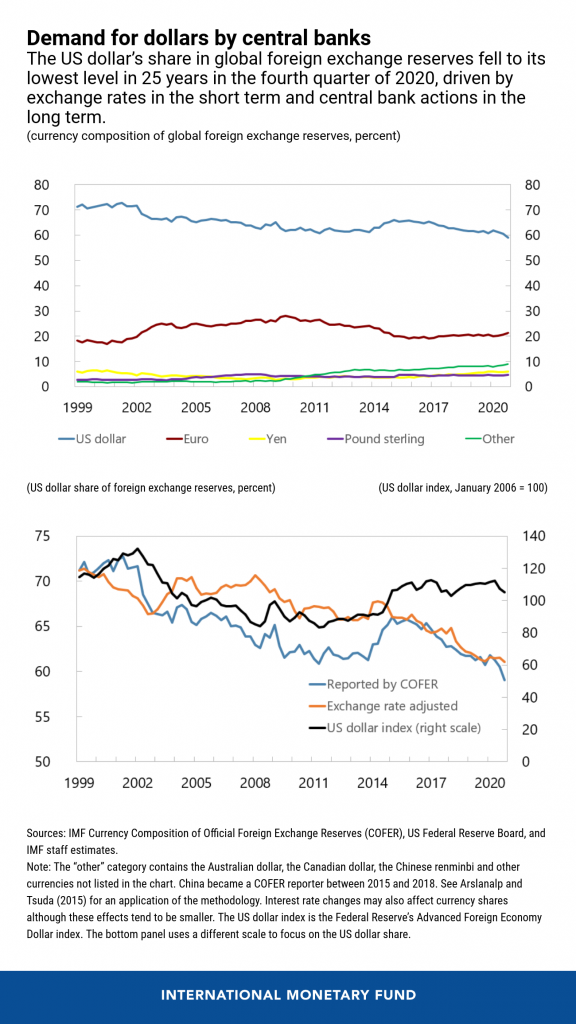 Over shorter periods, Exchange rate fluctuations can have a major impact on the currency composition of central bank reserve portfolios. Changes in the relative values of different government securities can also have an impact.

The second chart shows that the value of the dollar has been relatively constant over twenty-five years, and thus the longer-term decline has a different cause.

In the longer run, the US dollar’s share of global reserves will probably continue to fall as emerging market and developing economy central banks seek further diversification of the currency composition of their reserves. A few countries, such as Russia, have already announced their intention to do so.

View All
CIO Insights
The UK Requires Companies To Report on Climate Change by 2025
Read More
CIO Insights
What is A Senate Filibuster?
Read More
About GBIM
COVID 19: An update from our CEO
Read More