We have been accumulating promises from the Tory leadership candidates, and then this week the Office for Budgetary Responsibility stated its belief that a “No-Deal” Brexit would add an additional £30 billion to our national borrowing requirement.

I attended a meeting this week at which John McDonnell, the extreme left-wing Labour Shadow Chancellor, suggested that Boris and Jeremy should be asked about the credibility of their spending promises. How times have changed!

The starting point however already shows that the Government has increased its spending, as the impact of Brexit uncertainty has required their help to keep the economy afloat.

It looks like the era of post-GFC falling budget deficits is over. 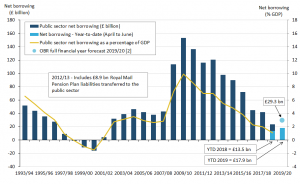