All this volatility! Up one day, down the next. Until recently many equity prices were at all-time highs, now they have suffered the biggest falls in history. What is going on?

We don’t have any terms of reference for what is happening in our daily lives, to our jobs or to our income, and so precautionary responses should be expected.

Fight or flight? I would rather fight another day please.

Some investors wish to have cash. Some had it already, but others have been in a dash for cash. This has caused some such investors to liquidate investments as soon as possible, making themselves forced sellers, when there have been few buyers.

Forced sellers have been selling what they can, and perhaps not what they should. This could be prudent in some cases, but not necessarily, and selling has been indiscriminate on many occasions. Those who held cash already have been largely biding their time, and taking opportunities which seem too good to ignore, when they arise.

The effect of this is to cause dramatic movements in prices (up and down).

This is the meaning of my title: large volume of sellers x small volume of buyers = prices have to fall a long way to tempt buyers back in, i.e. volume x volume = extreme volatility.

I will try to illustrate this.

First, the amount of assets being traded is very low compared to normal. This chart from JP Morgan shows the percentage of volumes traded for various assets at different times of stress compared to normal trading volumes. The current experience is especially poor. 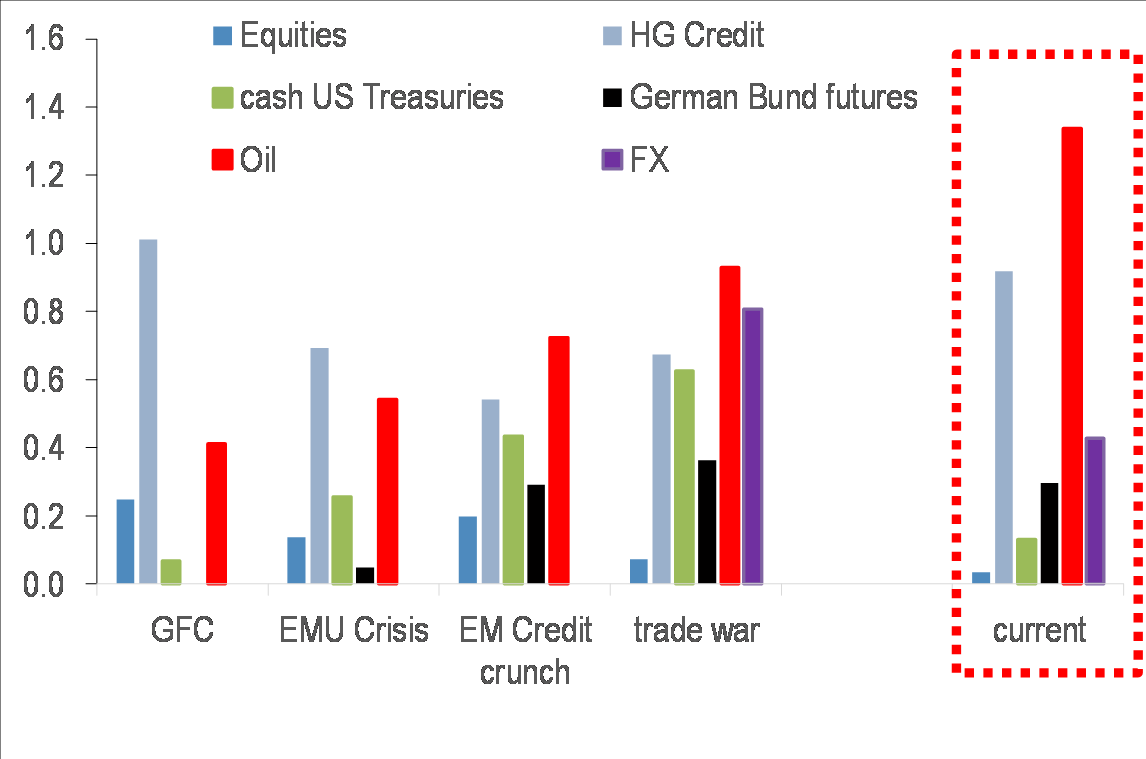 This means that prices can move dramatically on relatively small volumes of shares traded, and that people sell what they can.

An extreme example of this may be seen in the price movement of LXI REIT on 19th March. The shares opened at 98.9p, fell to a low of 63.1p and closed the day at 90p. The following day they closed at 103.6p, having traded as high as 106p during the day.

Nothing about the operations or finances of the company changed during the period.

On 19th March about 2 million shares were traded, and on four of the five days from 16th to 20th March 2 million or more shares were traded. On sixteen of the other eighteen trading days from the beginning of March the volume of shares traded was between 0.5 and 1.6 million. Clearly the size of the sale order was too great for the efficient trading of the shares. The company has 521 million shares in issue so, if the seller wanted to sell perhaps 5 million shares that represented 1% of the total.

The seller should have been more patient.

LXI REIT is a small property business, but we have also heard stories of difficulties in trading small amounts of US Treasury bonds and in hedging small volumes of the Pound Sterling against the US Dollar.

Intervention by governments and central banks has acted to reduce the levels of volatility by providing buyers of last resort for some but not all assets.

This intervention is happening to a degree which is unprecedented, and it will continue, so the point of maximum panic in financial markets may have been reached.

Until then, despite governmental and central bank intervention, volatility is likely to remain elevated. This is why it is important to have a diversified portfolio, to avoid owning what everyone else owns, such as an equity or bond index, and to avoid being a forced seller.

But improvement will come, and being long term investors we hope that from time to time we might be able to capitalise upon good opportunities when we see them.