What is A Senate Filibuster?

A filibuster is something we may become increasingly familiar with now that the US Senate is split 50/50 and the Biden Administration has ambitious legislative plans. Across America there is a debate on whether to end the right of the Senate to filibuster but using the filibuster to delay or block legislative action has a long history.

President Biden has taken office with a policy agenda intended to support the rollout of COVID-19 vaccines, stimulate the economy, reduce inequality, and combat climate change. While some progress on these issues is possible through executive power, Biden will also need to work with a partisan Congress where institutional obstacles like the cloture rule and the Senate filibuster can stand in his way.

The term filibuster – from a Dutch word meaning “pirate” – became particularly popular in the 1850s, when it was applied to efforts to hold the Senate floor in order to delay or prevent a vote on a bill[i].

The filibuster’s origins go back to 1805, when then Vice President, Aaron Burr, recommended that the Senate drop a rule that limited debates on its floor. By the 1840s the use of the delaying tactic had become more common in the Senate[ii].

In the Senate, but not in the larger House of Representatives, unlimited debate is allowed on the grounds that any senator should have the right to speak for as long as necessary on any issue.

The record for the longest individual speech goes to South Carolina’s J. Strom Thurmond who filibustered for 24 hours and 18 minutes against the Civil Rights Act of 1957[iii].

In 1917, senators adopted a rule (Rule 22), at the urging of President Woodrow Wilson, that allowed the Senate to end a debate with a two-thirds majority vote, a device known as “cloture”.

If a cloture motion is not supported by the special majority of senators, then the measure has been “filibustered”, a term given to the hours-long speeches senators have used over the decades to keep debate open. A successful filibuster prevents the Senate from voting on a bill.

Rule 22 was first put to the test in 1919, when the Senate invoked cloture to end a filibuster against the Treaty of Versailles. The treaty was never ratified.[iv]

Even with the cloture rule, filibusters remained an effective means of blocking legislation, since a two-thirds vote is difficult to obtain. Over the next five decades, the Senate occasionally tried to invoke cloture, but usually failed to gain the necessary two-thirds vote.

Filibusters were particularly useful to southern senators who sought to block civil rights legislation, including anti-lynching legislation, until cloture was invoked after a 60-day filibuster against the Civil Rights Act of 1964. In 1975 the Senate reduced the number of votes required for cloture from two-thirds to three-fifths, or 60 of the current 100 senators.

The idea behind the filibuster is to force the majority to earn support from at least a few members of the other party and so build greater consensus.[v] However, as partisanship has increasingly stymied decision-making in Washington, the filibuster has been blamed for sending countless pieces of legislation to their political graves and the use of cloture has skyrocketed (see below). 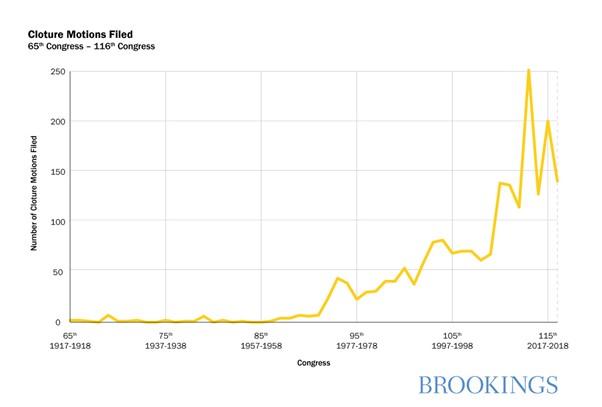 While much of the Senate’s business now requires the filing of cloture motions, there are some important exceptions.

One involves nominations to executive branch positions and federal judgeships on which, thanks to two procedural changes adopted in 2013 and 2017, only a simple majority is required to end debate.

A second includes certain types of legislation for which Congress has previously written into law special procedures that limit the amount time for debate. Because there is a specified amount of time for debate in these cases, there is no need to use cloture to cut off debate. Perhaps the best-known example of these are special budget rules, known as the budget reconciliation process, that allow a simple majority to adopt certain bills addressing entitlement spending and revenue provisions, thereby prohibiting a filibuster.

Calls to reform or abolish the filibuster gained traction on the campaign trail when it appeared Democrats could take control of the Senate. Now that the chamber is split 50-50, what are the chances we see attempts to change to the filibuster in 2021?