Vertical Farming: Is It Time To Grow Up?

In 1999 Dr. Dickson Despommier, of Columbia University in New York, presented his students with this problem: ‘By 2050, the global population will near 10 billion and an estimated 60% more food will be required than is currently produced. With finite arable land and water scarcity how can we avoid a potential catastrophe?’

In May 2018 55% of the world’s population was living in urban areas, and that percentage is expected to grow to at least 66% by 2050*. The migration from rural to urban areas is highest in developing countries where salary, social, or educational prospects are more attractive. How can cities grow sustainably?

In particular food supply is already under pressure in many urban areas, resulting in the transformation of food consumption and production. The number of city farms and vertical farms are growing worldwide.

Vertical farming was first put into practice in the 1950s. The idea was simple; integrate agriculture into a built environment to mass produce fresh crops. Vertical growing techniques attempt to optimise space, crop production per units of water, power, energy and nutrients. Plants are stacked in trays on top of one another and grown all year round resulting in a reliable and accessible source of food. 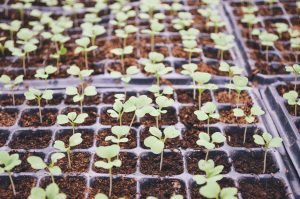 Techniques such as hydroponics, which uses water and nutrients but no soil, and aeroponics, which enables produce to be grown with 95% less water and no soil, enable such systems. Crops grown in such a built environment will not be lost to adverse weather conditions. It is also easier to introduce automation, while fossil-fuel-burning agricultural equipment, such as tractors, can be eliminated. The improved logistics of delivery are obvious.

Singapore, a densely populated city with limited arable land, established the first of a number of commercial vertical farms in 2012. The farms optimise land use and can operate on minimal manpower. High tech vertical farms have high yields. At Sky Greens in Lim Chu Kang, vegetables grow on 9m-tall towers made of tiers of planting troughs rotating around an aluminium frame.

Each tower produces five to ten times more vegetables than conventional methods in the same land area. Much of the food consumed in Singapore is imported, leaving it vulnerable to price movements and disruptions to delivery. Now one such farm produces 80 tonnes of vegetables every year. Others provide fish and crab. The problem of supply is receding.

Korea, Japan and the US also have these futuristic plant structures, and more are expected in Europe over the coming years.

Other creative solutions include a floating farm built in Rotterdam where 40 cows eat grass produced by LED light and produce 800 litres of milk a day. It’s anyone’s guess how the cows feel about floating above the water! In Shanghai there are plans in place to create a whole agricultural village with green houses, a seed library, vertical farms and more.

Might these technologies be used more widely? Fertile soil has been degraded over time, and erosion is more prevalent with climate change today. Fossil fuel and other costs can be high for foodstuffs being transported over great distances. The global population is growing fast and these approaches should have a meaningful impact.

On the other hand there are many understandable concerns about the lack of natural light, the use of chemical nutrients or GM seeds, and the apparent transition away from nature. The crops currently come at a premium for the consumer, however the food is fresh and technological advances are expected to reduce the price tag in the future.

Vertical farming might not tick everyone’s idea of a responsible investment however there is no doubt that it is a solution for preventing food poverty. Developments in this area can be a source of investment ideas in technology and ecology, and it is clear that the demand for these solutions is growing rapidly.

Article written by
Fran Hamer
Back to News & Insight